Chowing down on a bit of stormcrow

I’ll admit it up-front and with absolute sincerity: you guys were right. I wrote a pretty bitter entry last week about how pugs were getting me down; but as with many things it’s usually a safe bet to look at your own actions and attitude before deciding the problem is somebody else.

Oh, don’t get me wrong – the quality of pugs at eighty has been variable. There are jerks out there, it’s just that sometimes they are me. Or more likely to be Voss (just sayin’). Anyway, experimentally the other night when I was having trouble sleeping, I started queuing up for pugs on each of my characters in quick succession. It went a little something like this:

Utgarde Keep: Forget the strudels, have some humble pie.

After writing that last blog post about my beloved characters, I’ve had renewed mage interest. I think It’d be nice for Millya to nab the luscious four-piece mage set bonus before the expansion ends. So I queued her up, and to my surprise the wait wasn’t even that long, soon I was alongside some other good folks in Utgarde Keep. I wasn’t off to a strong start when I found that I couldn’t cast Arcane Brilliance. What the heck, why not? No reagents. It didn’t even make sense, because I’m of the school of preparedness that never has me leave home without a stack of at least 100 of the things. No matter, I just cast the single buffs. But whoops, what’s this? I hadn’t realized I was in Frost spec. Well…Frost is nice for heroics, it won’t be a problem, right?

It wouldn’t have been a problem, except that I’d forgotten a key detail. Frost is my all-out, balls-to-the-wall PvP spec. I remembered this to my chagrin as the tank skirted by a pack of mobs to continue on to the next corridor… Speak (my beloved water elemental) was not so happy to do so. I saw him go charging by and my heart sank. Oh crap… he was set to aggressive. I like him to charge around and attack everybody, you know – when I’m in a battleground.

Wearing only a thin bit of cloth and whimpering, I blinked down the hallway hoping that the tank would notice the pack of angry Vrykul chasing us. Fortunately for me, he did, and we killed them amid my abject apologies. I don’t think the tank was too mad, because he just said “heh,” and that was all that was said the whole instance. The rest passed without incident; I switched back to Arcane mid-way through, actually did decent damage, and finished up. That’s not a knock against Frost mages, incidentally. It’s just that my Frost spec is very PvP-centric, so it can’t put out the kind of numbers I can with Arcane. It was only later when I went to check my mail, incidentally, that I found out what had happened to my arcane powder.

In a fit of summer inventory cleaning – I’d put it on the auction house. I’m still shocked that nobody wanted it!

This is my mage being fearsome.

Next up I queued my super moonkin, Shae, for a heroic. I chose only DPS because it was late, and I didn’t really want the responsibility of healing. I joined the group happily as the load screen for Violet Hold came up. Great, Violet Hold! I love this place because my Starfall can’t accidentally pull extra mobs. Not that I would ever do that.

The only aberration as we zoned in was the night elf with the little plus sign next to his portrait. A priest, okay then. He looked sort of…shadowy, for a healing priest. I figured that he intended to drop shadow form and throw out a few heals when necessary, and so I didn’t question him. A few portals in, though, I was starting to wonder. Most of the group was at half health, the tank was even lower. I dropped moonkin form to HoT us all up, and then went back to DPSing. As the instance went on, I realized that he had absolutely no intention of throwing a direct heal, ever. (This was borne out by the stats at the end – all of his healing was Vampiric Embrace healing).

Granted, he still did quite a bit of Vampiric Embrace healing. More than I did with my direct healing. But as healers know, it’s not just how much you healed but rather when you healed that matters. I suppose I could have bitched at him. Frankly, I think queuing as a healer in order to nab a quick queue when you aren’t actually healing is pretty lame. But I wasn’t in the mood for an argument, so instead I took it as a personal challenge. I wanted to do the maximum amount of DPS, while still keeping the group alive. I managed both goals; as we finished Violet Hold a little while later. I mopped the floor with his DPS and I’d been healing. Nobody died, DPS was done, and Frost emblems were collected. It was actually one of the more fun heroics I’ve run in awhile.

This was the best moonkin screenshot I had in my folder: moonkin jousting. Because that's just how we roll.

Then for a final bit Reflection (Halls, that is).

Commonly accepted as the place where many pugs go to die, it’s the instance that Vidyala heals the most. I guess it’s because her gear is good enough (I’m not sure exactly how the LFD system works) and that many people queue for it specifically because of loot they want. So when I say “I’m willing to heal something at random,” someone else out there is saying, “HoR please.” I joined the group to heal (even though I just said that I hadn’t wanted to heal as my druid) primarily because I’m more comfortable healing with Vid than DPSing. The group consisted of another paladin tanking, a warrior and a mage in charge of the DPS. I’m sure there was another DPS there… but I can no longer remember who they were. They didn’t say a thing the whole time!

The pally tank, on the other hand, made sure we knew exactly what he wanted. “Get in the corner please,” he said. Obligingly, we all filed into the little alcove and crowded into the corner as we waited for the first trash. The trash continued with no problem. I’ll be honest here, I love healing HoR. I don’t think any amount of gear would make it boring. There’s never a time when I can sit back, relax, and stop healing. It was great! I even like fighting Falric. When I was first healing that fight at eighty it gave me hives. Now, I like to see that I can fill those green bars back up to 100% even though the healing/damage reduction debuff is increasing all the time. Even the fear that he does isn’t quite so nerve-wracking; it used to bring me within a hair’s breadth of death.

After we killed Falric, our intrepid tank said “CORNER,” and then “SORRY CAPS,” and I had to laugh. I told him, “Tank, you’re making me feel like my dog.” (“Go lie down! No, over there. Do it nowwww.”) The group laughed, but the tank remained firm. The corner was the place to be. After we’d killed more interminable trash waves and Marwyn, the tank paused to tell the mage (I think they were friends) what to expect from the next part. He concluded ambiguously with “experience a bitch.” As we were killing the next trash, the warrior yelled “BLADES OF LIGHT.” Again I laughed and asked him about it, and the ensuing conversation took us through the chase scene. He said, “It’s like Herod!” I asked him if it was a macro or did he just yell it when the mood struck him. He told me it was a macro with Bladestorm but only when he also popped his trinkets and some other ability, because he didn’t want to be spammy or anything. I only saw him yell it once during the instance, which means 1) he’s succeeding at not being spammy, but also 2) bad DPS! think of all of those wasted trinket opportunities.

Unfortunately there was no useful loot for either the mage or our warrior, but we parted with friendly exclamations on all sides. 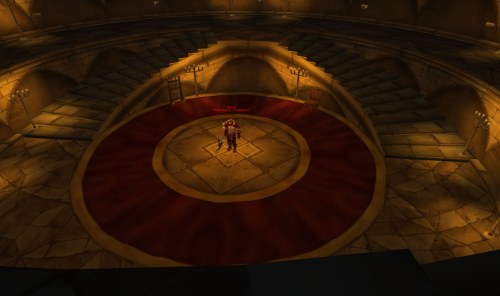 I actually had this in my screenshots folder. I'm not sure why.

So, just a quick recap. In the first pug, I was the doofus. In the second, compensating for someone being something of a doofus was quite fun, and in the third everyone was nice, it went very smoothly, and no one was a doofus. Maybe it’s the difference in attitude (mine), maybe it’s that pugs are meant to be experienced purely as a “true” pug – no guildies, friends or relations, just you and four random strangers. All I know is that I had a good time, and I haven’t begrudged the time spent in LFD to pick up extra frost emblems for the past week or so at all.

7 responses to “Chowing down on a bit of stormcrow”