Minus One Tail, Plus Tusks

Last week I did something radical to one of my characters.

She used to look like this, and live on the same server as my other characters. 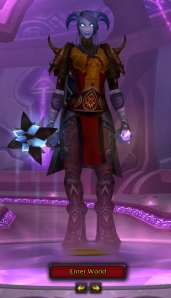 The artist formerly known as a Draenei.

Now she looks like this, and lives on a different server entirely.

It was an interesting experience, really. I have a friend who plays Horde on this other server. I wanted a level 80 to hang out with him and seldom have the opportunity to level my Horde mage there (she’s level 62, I believe). My shaman hasn’t been doing much. She has professions that are fairly independent of my other characters – Inscription, for the fancy shoulder enchants, and Alchemy, but she’s my second alchemist. I knew that if I transferred her I’d still have my priest to make flasks and transmute one gem a day. So she was a likely prospect. I’ve been only logging her in to transmute gems for weeks, and I do actually enjoy the shaman playstyle. If I put her in a situation where she is my only and primary level 80 character, she’ll have a chance to shine.

The preparation took a few hours. First, I looked at the faction change information on the official website. She’s even more ideal than I had thought. I never bothered to do the Argent Tournament stuff with her so it won’t matter that it gets reset. She’d be trading an elekk (we hates them) for a raptor. Seems fine to me! I decide I’m going to do it, and start loading up her bags with things that she will need, plus a few gifts for my Horde characters. She gets a sizeable portion of herbs, enchanting mats, and a ton of Netherweave and Frostweave bolts for my tailor over there. Once I’ve given her every conceivable thing she or the others could need, I start filling bag slots with Alliance-only recipes and pets. Kaching! 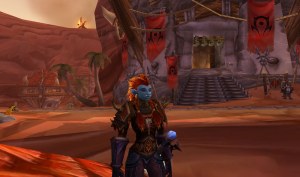 This place looks nice. It could use some more red Horde flags to spruce it up though...wait.

When you arrive “on the other side” you begin in  your faction’s capital city, so in my case Orgrimmar. I can only imagine what a bewildering experience this would be if you haven’t ever dabbled in playing the opposing faction. I know my way around Orgrimmar pretty well, but what I was really excited to see was Dalaran. I hopped on my new, blue raptor and zipped on over to catch a Zeppelin to Northrend!

First impressions – I had no idea that Warsong Hold was so massive. I felt genuinely awed as the zeppelin came in. Of course it isn’t the same experience as first coming to Northrend; I got onto my flying mount to explore, but still. One thing that’s messing me up as a “new” Horde character is flight points. Flight points are automatically transferred as far as I understand, based on your level. e.g. if you are a level 60, you’ll have the flight points you’d expect to have in Azeroth, both Kalimdor and Eastern Kingdoms, but not all the Outlands ones yet. As a level 80, I have all the flight points I’d expect to have (and let’s be honest, I’ve missed flight points in Northrend before – just found one on my druid main in Zul’drak last week) so I probably have more than I usually would. But every time I go to a city or town I don’t know where they ARE. It is for this reason, and this reason alone that I flew to Dalaran on my mount instead of hopping a flight.

Arriving in Dal, I gleefully sprinted to the Horde area to check it out. I remember when Dalaran was new and I was exploring, I tried to run in there only to be rudely punted out so many times. Now I could finally poke around and see it properly.

It’s interesting, especially as a study of contrasts between the “Alliance only” area and the “Horde only” area. People had made jokes before about “The Filthy Animal” to me. (Horde faction wins at self-deprecating irony). But I actually really like the “inn.”

This was a bit of a shock, though. These innkeepers are seriously KEEPING the INN.

I like the massively sized, “lodge” type feel of TFA. You get the sense that large groups of people could and do meet here, and it feels more tribal, not in a “look, our decor involves tusks and spikes way” but in a “We’re all in this together and nobody gets special perks” kind of way. So I quite enjoyed exploring there, figuring out where the emblem vendors are – where everyone is standing around looking at gear, nothing too unusual there – and the portals to the capital cities. They’re very conveniently located. I feel like it’s pretty expedient to hop back to Dalaran and run over the portals. I’m not sure if the Alliance run is really longer but it feels longer.

So what do I think of the Alliance exclusive part of Dalaran now that I’ve seen the Horde? I think that I need to stop trying to run into it on my raptor. It does feel that Alliance got the lion’s share here (har), which actually makes sense to me given Dalaran’s lore. But again, it isn’t necessarily “more” or “better” so much as it is different. Alliance-side has the towers and it’s all connected – you can run up the stairs in The Heroes’ Welcome and then make your way over to the emblem vendor, or hang out in the Beer Garden (not something I do anymore since being on a PvE server, but we used to go there to RP sometimes). It feels more individualistic – small tables where you can sit with a few other people, and opulent in the decoration (We’re talking about a place called “The Heroes’ Welcome” here, it has more than its fair share of pretension).

One thing to note that was pretty interesting, apparently as a shaman that faction transfers, your totem quests are reset. Not that you don’t have totems, you still do (whichever totem “counts as an air, fire, earth, water” totem) but you haven’t done that faction’s quests to acquire the originals. Some orc hanging out in Dalaran said to effectively, “Hey slacker, there are some things you haven’t learned yet about being a shaman. Like, you know, that whole totem thing? Kind of important.”

What’s nice about this, though, is that the original quests have been updated to give level 80 equivalent rewards. So they’re saying, “Go find so and so at the top of stupidly high, treacherous place where you will fall many times,” but giving me thirteen gold to do it. Suddenly, shaman totem quests are looking all right! I spent some time working on them, although I’m not quite done the water one. It has all that continent hopping and I got lazy.

Of course I hardly wasted any time before diving in to do some pugging. I wanted to get my two-toed feet wet and collect some emblems as soon as I could. I’m experiencing some of the “low DPS blues” in random heroics. I can’t actually say whether this is a Horde thing, because there’s too great a disparity between this character’s gear and my Alliance “mains.” Another thing is, I swapped Heroic Presence for Berserking. Berserking is awesome, but losing that 1% hit hurt me at this gear level. I even had to gem for hit, and I hate doing that. Even so, understand when I say “low DPS” I mean she does around 2800-3000 on average. Her gear is some crafted 200 epics, a few 226 pieces, and some 219s out of the ToC 5-man. I’d take her to Ulduar comfortably. And yet, the pugs have been an absolute grab bag of oddity.

Not rude, really, just…Head-scratchingly strange. My first random heroic was a Nexus run. Perfect. It’s not a complicated instance, it’s one of the “easier” heroics. We got through it right up until almost being at the tree boss, he was the last boss left before Keri… and the tank just left, without a word. The healer quickly followed suit. This battlegroup isn’t like my other, though – the pug scene is brisk. A new tank and healer arrived almost immediately, as puzzled as we were. “You lost your tank and heals?” the tank asked.

“Yeah,” I told him, “And I don’t really know why.”
“But you were almost finished,” he says. And it doesn’t make any sense to me, either. Sure, we aren’t doing 6K DPS apiece but things were dying. We finish the run without any further hitches.

A different pug finds me in Utgarde Pinnacle, this time we get as far as Skadi, but the “problem” is more evident. We’re not moving fast enough for the healer. “Gogogo,” he says, and “Hurry up guys, I want to get some Subway lol.” I bite my tongue and resist telling him that we can’t really hurry – we can DPS as quickly as we can DPS, and that’s all we can do. That’s what the “PS” stands for. After Skadi, he too drops group without a word. Yet another person nearly at the end of an instance who can’t be bothered to wait it out. We did get a new healer and finish the run, but I remain mystified.

I suppose my shamanic DPS just isn’t good enough for some tank/healer prima donnas, but generally the pug experiences have still been fine. I bought a piece of Thrall’s T9 gear with my hard-won emblems. I realized only after the fact that the gear looks differently – so I won’t get to enjoy the shaman boat shoulders and skirt favoured by Nobundo. In fact, having one less Draenei makes me sad in general.

There’s only one solution!

She has no weapon in this picture because she has to share with Vid.

A new shaman alt is never a bad thing, right? That’s what I thought.